The Purple Heart comes with a unique service ribbon, which is worn on the recipient's uniform in situations where the full medal is not worn. If you have earned this decoration, you can wear the service ribbon on your ribbon rack. 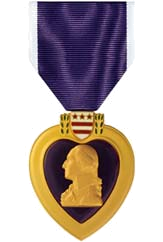 Design of the Purple Heart

What is the Purple Heart Decoration?

The United States military sorts decorations into categories called Classes and Types. The Purple Heart medal is classified as a Personal Decoration of the type Non-Combat Heroism Medal.

How Do You Earn the Purple Heart?

The Order of Precedence of the Purple Heart is 21, and this precedence is used when placing the associated service ribbon on your uniform ribbon rack. You can see a full list of decorations in the order of precedence on the Decorations homepage.

During World War I, World War II, The Korean War, and Vietnam, many awards were often left out of veterans service records. This was due to the prevalence of the award and the lack of record keeping of injuries and hospital stays. Today, an original citation and award certificate are presented to the service member and filed in the field service record to prevent lost records

The Purple Heart is awarded either by being pinned upon the serviceman or woman or presented in a box. It is worn after the Bronze Star and before the Defense Meritorious Service Medal.