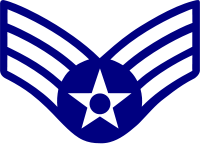 Senior Airman (SrA) is the fourth, and highest, enlisted rank in the US Air Force. Senior Airman is the rank just above an Airman First Class and just below Staff Sergeant. A Senior Airman is promoted from an Airman First class after 36 months time in service and 20 months time as an Airman First Class, or 28 months time as an airman first class, along with a commander's recommendation. A few airmen, less then 15%, can be promoted up to six months early after going through a strict process called Below-The-Zone, which involves qualifying for many specific requirements and going before a board to be judged fit for the early promotion. A Senior Airman's responsibilities include being proficient in their technical abilities, developing leadership skills, and sometimes supervising an airman of a lesser rank. They must also study at the Airman Leadership School (ALS) for six weeks; this school is the first part of the Air Force's required professional military education. The six weeks of ALS must be completed before a SrA can be promoted to a Staff Sergeant.

The Senior Airman's rank insignia is the same as an Airman's and the Airman First Class's, a silver chevron, outlined in blue, with a downwards point that has an encircled star at the center, except that it has three stripes in the chevron.

Senior Airman is the 4th rank in the United States Air Force , ranking above Airman First Class and directly below Staff Sergeant. A senior airman is an Enlisted Airman at DoD paygrade E-4, with a starting monthly pay of $2,263.

How do you become a Senior Airman?

A Senior Airman is most often promoted from Airman First Class (A1C), although promotion from lower paygrades may occur with sufficient display of leadership and experience.

Some factors that are looked at when deciding if an airman first class should be promoted quicker include: leadership potential, physical training scores, recommendations, and education progress.

What is the proper way to address a Senior Airman?


Warning: A non-numeric value encountered in /home/militaryranks/public_html/includes/dbconnect.php on line 201
The correct way to address a Senior Airman named Mr. Garelick is "Airman Garelick", or written as SrA Garelick. In formal situations, a Senior Airman should always be addressed by their full rank.

How much does a Senior Airman earn?


Warning: A non-numeric value encountered in /home/militaryranks/public_html/includes/dbconnect.php on line 201
Basic pay for an entry-level Senior Airman with 2 or less years of experience is $2,262.60 per month.

A Senior Airman receives an automatic raise to their basic pay every one to two years. Basic pay is only a small percentage of a Senior Airman's final compensation package.

In addition to a monthly basic pay salary, a Air Force Senior Airman may be eligible for multiple types of allowances and bonus pay including retirement benefits, hostile fire pay, and more.

The Government civilian-employee equivalent of a Senior Airman is paid under the General Schedule payscale. For more details, see this Air Force rank to GS grade conversion table