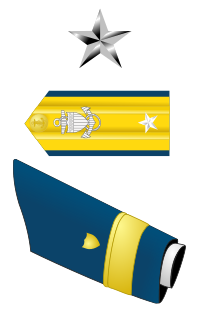 Promotion to Rear Admiral Lower Half is an extremely selective process, as the Coast Guard can only have a limited number active-duty flag officers at any given time. Eligible candidates, chosen from among the senior commissioned officers, are screened and recommended for promotion by a sitting board of currently active flag officers. This list must be approved by the Secretary of the Navy, the Joint Chiefs of Staff, and the Secretary of Defense before the final choice is made from the list of eligible candidates by the President of the United States.

Rear Admiral Lower Half is the 23rd rank in the United States Coast Guard , ranking above Captain and directly below Rear Admiral. A rear admiral lower half is a Flag Officer at DoD paygrade O-7, with a starting monthly pay of $9,140.

How do you become a Rear Admiral Lower Half?

A Rear Admiral Lower Half is most often promoted from Captain (CAPT), although promotion from lower paygrades may occur with sufficient display of leadership and experience.

Suitable candidates, most often mature individuals who have served three years as a captain, are carefully screened and recommended for promotion by a sitting board of currently active flag officers. The list of recommended officers, once approved by the Secretary of the service, the Secretary of Defence, and the Joint Chiefs of Staff, is then forwarded to the President of the United States for final selection. The appointment is confirmed by the US Senate, after which it becomes official. Traditionally, new flag officers are welcomed by a personal letter from all other currently serving flag officers.

What is the proper way to address a Rear Admiral Lower Half?

How much does a Rear Admiral Lower Half earn?


Warning: A non-numeric value encountered in /home/militaryranks/public_html/includes/dbconnect.php on line 201
Basic pay for an entry-level Rear Admiral Lower Half with 2 or less years of experience is $9,140.10 per month.

In addition to a monthly basic pay salary, a Coast Guard Rear Admiral Lower Half may be eligible for multiple types of allowances and bonus pay including clothing allowance, hostile fire pay, housing allowance, and more.

The Government civilian-employee equivalent of a Rear Admiral Lower Half is paid under the General Schedule payscale. For more details, see this Coast Guard rank to GS grade conversion table