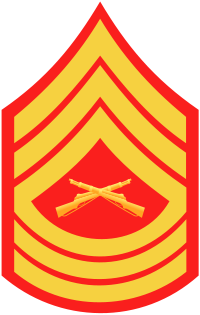 First Sergeant is a senior non-commissioned officer's rank in the United States Marine Corps. A First Sergeant shares the E-8 paygrade with Master Sergeant, although the two ranks have separate spheres of responsibility.

A First Sergeant serves as the senior enlisted advisor to the commander of a medium-to-large unit of Marines, such as a platoon or a company. As the senior enlisted advisor, First Sergeants hold the responsiobility of being the main bridge between enlisted Marines and their company commander. In this position, they serve as advocates for their Marines to the command hierarchy and assist in leading tactical and training operations.

To get promoted to First Sergeant, a Marine (generally holding the rank of Gunnery Sergeant) must receive an outstanding Fitrep (fitness report) from their commanding officer and successfully meet a series of experience and leadership requirements. Before beginning the promotion qualification rounds, the candidate will choose their desired track for promotion - First Sergeant for Marines interested in command responsibility, and Master Sergeant for those interested in technical and operations management.

For First Sergeants continuing on the command track, the next promotable rank is Sergeant Major. The equivalent rank to First Sergeant was established by the Marine Corps back in 1833, and given its modern title in 1872.

Master Sergeant is the 8th rank in the United States Marine Corps , ranking above Gunnery Sergeant and directly below First Sergeant. A master sergeant is a Staff Noncommissioned Officer at DoD paygrade E-8, with a starting monthly pay of $4,480.

How do you become a Master Sergeant?

A Master Sergeant is most often promoted from Gunnery Sergeant (GySgt), although promotion from lower paygrades may occur with sufficient display of leadership and experience. Click here to learn more about promotion to Master Sergeant.

What is the proper way to address a Master Sergeant?


Warning: A non-numeric value encountered in /home/militaryranks/public_html/includes/dbconnect.php on line 201
The correct way to address a Master Sergeant named Mr. Garelick is "Master Sergeant Garelick Informal: Top", or written as MSgt Garelick. In formal situations, a Master Sergeant should always be addressed by their full rank.

How much does a Master Sergeant earn?


Warning: A non-numeric value encountered in /home/militaryranks/public_html/includes/dbconnect.php on line 201
Basic pay for an entry-level Master Sergeant with Over 8 years of experience is $4,480.20 per month.

A Master Sergeant receives an automatic raise to their basic pay every one to two years. Basic pay is only a small percentage of a Master Sergeant's final compensation package.

In addition to a monthly basic pay salary, a Marine Corps Master Sergeant may be eligible for multiple types of allowances and bonus pay including education allowance, clothing allowance, hostile fire pay, and more.

The Government civilian-employee equivalent of a Master Sergeant is paid under the General Schedule payscale. For more details, see this Marine Corps rank to GS grade conversion table