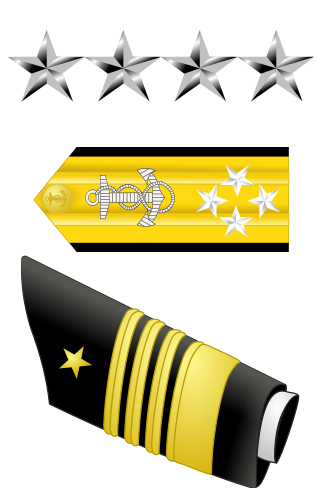 Admiral is a four-star flag officer in the U.S. Navy, equivalent to the rank of General in the other Armed Services. The rank of Admiral is temporary and generally used only in times of war. Because the five-star Fleet General rank is only used very rarely, Admiral is generally considered the highest rank attainable by officers in the Navy.

Officers are promoted to Admiral in order to fill a certain office, and may only remain in-grade for a certain amount of time. Of the 160 flag officer slots allocated to the Navy, there can be only 6 four-star Admirals. Two of these slots are reserved for the Chief of Naval Operations and the Vice Chief of Naval Operations so only four active-duty admirals serve in the field at any given time.

An Admiral commands a regional Navy fleet, such as the Pacific or Atlantic fleets, during an operation or war and answers directly to the Fleet Admiral, if there is one, and the President of the United States.

As a four-star flag officer, an Admiral may fly the Admiral's pennant over any ship or station on which he is serving; the flag is four white stars on a navy blue background.

Promotion to Admiral is initiated with nomination of a candidate by the President of the United States from the ranks of active Rear Admirals, lower half or upper half. Nomination is based on recommendations provided by the Secretary of the Navy and the Joint Chiefs of Staff.

Four-star flag officers generally serve for a tour of three years, and a variety of mandates apply to their retirement from the Navy.

Most admirals retire well before their mandatory retirement date to allow other officers the chance to fill their position. Typically, they are allowed to retire in-grade to retain their title and paygrade through retirement.

Admiral is the 25th rank in the United States Navy , ranking above Vice Admiral and directly below Fleet Admiral. An admiral is a Flag Officer at DoD paygrade O-10, with a starting monthly pay of $16,442.

What is the proper way to address a Admiral?


Warning: A non-numeric value encountered in /home/militaryranks/public_html/includes/dbconnect.php on line 201
The correct way to address a Admiral named Mr. Jones is "Admiral Jones", or written as ADM Jones. In formal situations, a Admiral should always be addressed by their full rank.

How much does a Admiral earn?


Warning: A non-numeric value encountered in /home/militaryranks/public_html/includes/dbconnect.php on line 201
Basic pay for an entry-level Admiral with Over 20 years of experience is $16,441.80 per month.

A Admiral receives an automatic raise to their basic pay every one to two years. Basic pay is only a small percentage of a Admiral's final compensation package.

In addition to a monthly basic pay salary, a Navy Admiral may be eligible for multiple types of allowances and bonus pay including clothing allowance, personal money allowance, retirement benefits, education allowance, and more.

For full details on the Navy's Admiral compensation and retirement plan, visit the 2021 Navy Admiral Pay Chart. A full table of the Navy's current paygrades are available at the Navy Pay Chart.

The Government civilian-employee equivalent of a Admiral is paid under the General Schedule payscale. For more details, see this Navy rank to GS grade conversion table