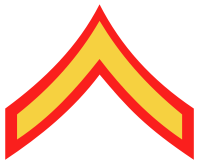 Private is the entry-level rank in the Marine Corps. Unlike the next paygrade of Private First Class, Marine Corps privates wear no rank insignia. Most enlisted Marines begin service as an E-1 Private in Basic Training, and usually receive a promotion to Private First Class after serving for a specified amount of time.

Because their uniforms have a plain black area instead of a rank insignia, privates in the Marine Corps are often informally referred to as "slick sleeves" or "fuzzies" by more experinced marines.

Private is the 1st rank in the United States Marine Corps . A private is a Junior Enlisted at DoD paygrade E-1, with a starting monthly pay of $1,733.

How do you become a Private?

Click here to learn more about promotion to Private.

What is the proper way to address a Private?


Warning: A non-numeric value encountered in /home/militaryranks/public_html/includes/dbconnect.php on line 201
The correct way to address a Private named Mr. Williams is "Private Williams", or written as Pvt Williams. In formal situations, a Private should always be addressed by their full rank.

How much does a Private earn?


Warning: A non-numeric value encountered in /home/militaryranks/public_html/includes/dbconnect.php on line 201
Basic pay for an entry-level Private with 2 or less years of experience is $1,733.10 per month.

A Private receives an automatic raise to their basic pay every one to two years. Basic pay is only a small percentage of a Private's final compensation package.

In addition to a monthly basic pay salary, a Marine Corps Private may be eligible for multiple types of allowances and bonus pay including hazard pay, retirement benefits, education allowance, and more.

The Government civilian-employee equivalent of a Private is paid under the General Schedule payscale. For more details, see this Marine Corps rank to GS grade conversion table