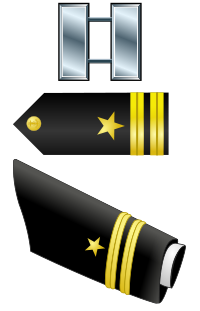 Lieutenant is the third commissioned officer rank in the United States Navy, and is comparable to the rank of Captain in the other branches of the Armed Service. Lieutenants serve as Division Officers aboard Navy ships, and command groups of sailors and petty officers in various divisions including the deck department, engineering, and others.

Navy lieutenants are eligible to receive the position of First Lieutenant, a special billet that provides exceptional officers with enhanced leadership and responsibilities. A First Lieutenant often serves as second in command aboard small naval ships, including frigates and destroyers, or as the senior Division Officer on a larger vessel.

Lieutenant is the 18th rank in the United States Navy , ranking above Lieutenant Junior Grade and directly below Lieutenant Commander. A lieutenant is a Junior Officer at DoD paygrade O-3, with a starting monthly pay of $4,383.

How do you become a Lieutenant?

A Lieutenant is most often promoted from Lieutenant Junior Grade (LTJG), although promotion from lower paygrades may occur with sufficient display of leadership and experience.

Ensigns are all but guaranteed to promote to LTJG exactly two years after their commissioning date. Exceptions include officers who have received Non-Judicial Punishment for a serious offense such as a DUI.

What is the proper way to address a Lieutenant?


Warning: A non-numeric value encountered in /home/militaryranks/public_html/includes/dbconnect.php on line 201
The correct way to address a Lieutenant named Mr. Miller is "Lieutenant Miller or Mr./Ms. Miller", or written as LT Miller. In formal situations, a Lieutenant should always be addressed by their full rank.

How much does a Lieutenant earn?


Warning: A non-numeric value encountered in /home/militaryranks/public_html/includes/dbconnect.php on line 201
Basic pay for an entry-level Lieutenant with 2 or less years of experience is $4,383.30 per month.

A Lieutenant receives an automatic raise to their basic pay every one to two years. Basic pay is only a small percentage of a Lieutenant's final compensation package.

In addition to a monthly basic pay salary, a Navy Lieutenant may be eligible for multiple types of allowances and bonus pay including clothing allowance, hostile fire pay, housing allowance, education allowance, and more.

For full details on the Navy's Lieutenant compensation and retirement plan, visit the 2021 Navy Lieutenant Pay Chart. A full table of the Navy's current paygrades are available at the Navy Pay Chart.

The Government civilian-employee equivalent of a Lieutenant is paid under the General Schedule payscale. For more details, see this Navy rank to GS grade conversion table