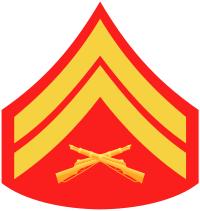 A Corporal in the Marine Corps is a junior noncommissioned officer, and is equivalent in rank to the Army's junior NCO ranks of Corporal and Specialist. Corporals usually command small contingents of Marines in combat and operations, including four-man fireteams (which may also be lead by a Lance Corporal) or eight-man squads comprising of two fireteams.

The Marine Corps specializes in small-unit operations, and as a result Corporals hold a significant amount of authority and resposibility in contrast to the lighter duties of Lance Corporals and Privates. Because of the responsibilities delegated to squad and fireteam leaders, promotion to Corporal is seen as a very significant accomplishment for an enlisted Marine.

Promotion to Corporal is awarded on a rolling basis to experienced soldiers who achieve a qualifying composite or cutting score in a variety of assessments.

Corporal is the 4th rank in the United States Marine Corps , ranking above Lance Corporal and directly below Sergeant. A corporal is a Noncommissioned Officer at DoD paygrade E-4, with a starting monthly pay of $2,263.

How do you become a Corporal?

A Corporal is most often promoted from Lance Corporal (LCpl), although promotion from lower paygrades may occur with sufficient display of leadership and experience. Click here to learn more about promotion to Corporal.

What is the proper way to address a Corporal?


Warning: A non-numeric value encountered in /home/militaryranks/public_html/includes/dbconnect.php on line 201
The correct way to address a Corporal named Mr. Smith is "Corporal Smith", or written as Cpl Smith. In formal situations, a Corporal should always be addressed by their full rank.

How much does a Corporal earn?


Warning: A non-numeric value encountered in /home/militaryranks/public_html/includes/dbconnect.php on line 201
Basic pay for an entry-level Corporal with 2 or less years of experience is $2,262.60 per month.

A Corporal receives an automatic raise to their basic pay every one to two years. Basic pay is only a small percentage of a Corporal's final compensation package.

In addition to a monthly basic pay salary, a Marine Corps Corporal may be eligible for multiple types of allowances and bonus pay including personal money allowance, hostile fire pay, education allowance, hazard pay, and more.

The Government civilian-employee equivalent of a Corporal is paid under the General Schedule payscale. For more details, see this Marine Corps rank to GS grade conversion table