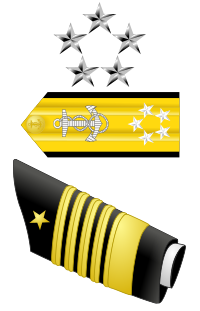 Fleet Admiral is the 26th rank in the United States Navy , ranking above Admiral. A fleet admiral is a Flag Officer at DoD paygrade O-11, with a starting monthly pay of $
Notice: Trying to access array offset on value of type null in /home/militaryranks/public_html/ranks.php on line 190
0
.

What is the proper way to address a Fleet Admiral?


Warning: A non-numeric value encountered in /home/militaryranks/public_html/includes/dbconnect.php on line 201
The correct way to address a Fleet Admiral named Mr. Smith is "Admiral Smith", or written as FADM Smith. In formal situations, a Fleet Admiral should always be addressed by their full rank.

How much does a Fleet Admiral earn?

Notice: Trying to access array offset on value of type null in /home/militaryranks/public_html/ranks.php on line 259
years of experience is $0.00 per month.

A Fleet Admiral receives an automatic raise to their basic pay every one to two years. Basic pay is only a small percentage of a Fleet Admiral's final compensation package.

In addition to a monthly basic pay salary, a Navy Fleet Admiral may be eligible for multiple types of allowances and bonus pay including food allowance, personal money allowance, retirement benefits, and more.

The Government civilian-employee equivalent of a Fleet Admiral is paid under the General Schedule payscale. For more details, see this Navy rank to GS grade conversion table