The Coast Guard Medal comes with a unique service ribbon, which is worn on the recipient's uniform in situations where the full medal is not worn. If you have earned this decoration, you can wear the service ribbon on your ribbon rack. 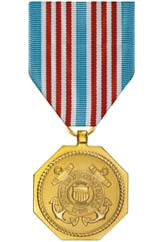 Design of the Coast Guard Medal

The medal is made of bronze. It is octagonally shaped and in the centre is the seal of the Coast Guard. The seal is surrounded by a cable. The octagon shape is derived from the Soldiers Medal and the Navy and Marine Corps Medal, and the seal in the center refers to Coast Guard service.The border refers to both naval service and perfection of ideals in the service of man. On the reverse of the medal in raised letters is the inscription, FOR HEROISM.

What is the Coast Guard Medal Decoration?

The medals ribbon has central and stripes of a light blue known as grotto blue; centered on either half of the ribbon is a field of white containing three scarlet stripes. The colors were adapted from those of the Coast Guard seal.

The United States military sorts decorations into categories called Classes and Types. The Coast Guard Medal medal is classified as a Personal Decoration of the type Non-Combat Heroism Medal.

How Do You Earn the Coast Guard Medal?

US Congress authorized the establishment of the Coast Guard Medal on August 4, 1949, but it was not until 1958 that the medal was actually bestowed. The medal was designed by Thomas Jones of the U.S. Armys Institute of Heraldry. It is awarded to any member of the Armed Forces who, while serving alongside the US Coast Guard, distinguishes himself or herself by heroism not involving actual conflict with an enemy.

The Order of Precedence of the Coast Guard Medal is 19, and this precedence is used when placing the associated service ribbon on your uniform ribbon rack. You can see a full list of decorations in the order of precedence on the Decorations homepage.

The medal is worn before the Bronze Star and after the Airmans medal. Subsequent awards are denoted by the wearing of a bronze star appurtenance.

The Stolen Valor Act of 2013 is a federal law that makes it illegal for any person to falsely claim to be the recipient of certain military awards, "with the intention of obtaining money, property, or other tangible benefit by convincing another that he or she received the award".This decoration is covered by the Stolen Valor act. Fraudulently claiming to have received a Coast Guard Medal can result in punishment including a fine, imprisonment for not more than one year, or both