The Navy Cross comes with a unique service ribbon, which is worn on the recipient's uniform in situations where the full medal is not worn. If you have earned this decoration, you can wear the service ribbon on your ribbon rack. 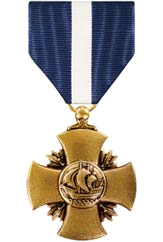 Design of the Navy Cross

The medal is a modified cross pattée, a type of Christian cross, which has arms narrow at the center, and flared in a curved shape. The ends of its arms are more rounded then a conventional cross pattée. There are four laurel leaves adorned with berries in each of the crosss arms representing achievement. In the center of the cross is a ship sailing waves leftward. The ship is a caravel, a Portuguese sailing ship from the 15th century. It is a symbol often used by the Naval Academy representing both naval service and the tradition of the sea. On the reverse of the medal are crossed anchors, from the early nineteenth century, wrapped in cables engraved with the letters USN.

What is the Navy Cross Decoration?

The Navy Cross is the second highest award in the US Navy. It can be awarded to a member of the US Navy, US Marine Corps, or US Coast Guard.

The earliest version of the Navy Cross (1919?1928) are distinguished by a narrow strip of white. The affectionately named "Black Widow" medals were awarded from 1941?1942 and are notable due to the dark color from over-anodized finish.

The United States military sorts decorations into categories called Classes and Types. The Navy Cross medal is classified as a Personal Decoration of the type Service Cross Medal.

How Do You Earn the Navy Cross?

The Navy Cross is awarded by the Secretary of the Navy. It may be awarded to members of the other armed services and foreign military personnel who are serving with U.S. Naval Forces. The Navy Cross was established by Act of Congress (Public Law 65-253) and approved on February 4, 1919.

In order to be awarded the Navy Cross, the action must:


In order to merit the Navy Cross, the actions must be performed in the presence of great danger, or at great personal risk. Their actions must be of such moral courage and gallantry as to render the individual's action(s) highly conspicuous among others of equal grade, rate, experience, or position of responsibility. You can not receive the Navy Cross because of a multitude of minor actions. As originally authorized, the Navy Cross could be awarded for distinguished non-combat acts, but legislation of 7 August 1942 limited the award to acts of combat heroism.

The Order of Precedence of the Navy Cross is 3, and this precedence is used when placing the associated service ribbon on your uniform ribbon rack. You can see a full list of decorations in the order of precedence on the Decorations homepage.

Before 1942, The Navy Cross originally was the Navy's third-highest decoration. However, after Congressional vote, the order of precedence was revised, placing the Navy Cross above the Distinguished Service Medal. Today, the Navy Cross is worn after the Medal of Honor and before all other awards.Additional awards of the Navy Cross are denoted by gold or silver ?5/16 inch stars affixed to the suspension ribbon or service ribbon of the medal. A gold star is issued for the second through fifth awards, to be replaced by a silver star indicating a sixth award.