The Air Force Combat Action Medal comes with a unique service ribbon, which is worn on the recipient's uniform in situations where the full medal is not worn. If you have earned this decoration, you can wear the service ribbon on your ribbon rack. 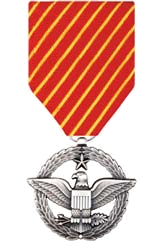 The medal is silver. A laurel wreath surrounds the medals art deco eagle emblem. The eagle is holding a national flag shield with thirteen perpendicular stripes on its breast faces right, over the right talon which is holding arrows. It intends to show it is a combat medal. The left talon clutches an olive branch showing peace. The eagle which symbolizes Mitchell's military rank insignia of colonel,[16] has above it a five-pointed star which represents Mitchell's wartime promotion to the temporary rank of brigadier general in October, 1918. The reverse side of the medal contains two rows of words written on a scroll at the center of the eagle, "U.S. Air Force" and "Combat Action".

What is the Air Force Combat Action Medal Decoration?

The design for the medal and the ribbon color (scarlet with ten yellow stripes) come from the circular insignia painted on planes which were piloted by Brigadier General William "Billy" Mitchell, including a French-built SPAD XVI (SPAD 16) fighter aircraft he piloted in France during World War I.

How Do You Earn the Air Force Combat Action Medal?

The Air Force Combat Action Medal was established recently in 2007. It recognises members of the US Air Force who have engaged in ground or aerial combat. Nomination for the medal is restricted to members of the U.S. Armed Forces who on or after 11 September 2001 were under any of the following conditions:


Retroactive awards prior to 11 September 2001 are not authorized.

The Order of Precedence of the Air Force Combat Action Medal is 39, and this precedence is used when placing the associated service ribbon on your uniform ribbon rack. You can see a full list of decorations in the order of precedence on the Decorations homepage.

According to a USAF Memo: The Air Force Combat Action Medals authorized device is a gold star. It is worn to recognize subsequent operations when approved by the Chief of Staff of the Air Force. However, gold stars are not included in the Air Force list of authorized ribbon devices.

Lieutenant General Tod Wolters wore a ?3/16" gold star on his service ribbon on his uniform from 2013, marking the first time an Air Force Personnel member has worn the ribbon appurtenance.