The Navy Good Conduct Medal comes with a unique service ribbon, which is worn on the recipient's uniform in situations where the full medal is not worn. If you have earned this decoration, you can wear the service ribbon on your ribbon rack. 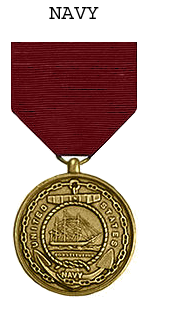 The Navy medal is a golden circular with a sailing ship in the center. The ship is surrounded by a chain and anchor. The words "United States Navy" is placed on each side of the ship.

What is the Navy Good Conduct Medal Decoration?

Perhaps one of the oldest awards, the Navy Good Conduct medal was created in April of 1869. Originally not a medal that was worn on the uniform but included in discharge papers, it was a way of rewarding Sailors who have served honorably and faithfully through their enlistment. Though the medal has been updated four times since its inception, the medal is now awarded every three years to those for honorable service with no formal reprimand, Article 15 or Court Martial.

How Do You Earn the Navy Good Conduct Medal?

To be awarded the medal, a military member must serve three years without any formal discipline such as a Letter of Reprimand, Article 15 or Court Martial. This medal is automatic if the time is appropriately served.

The Order of Precedence of the Navy Good Conduct Medal is 60, and this precedence is used when placing the associated service ribbon on your uniform ribbon rack. You can see a full list of decorations in the order of precedence on the Decorations homepage.

The ribbon is worn between the Prisoner of War Medal, Combat Readiness Medal(Air Force) and the Reserve Good Conduct Medal.

The Stolen Valor Act of 2013 is a federal law that makes it illegal for any person to falsely claim to be the recipient of certain military awards, "with the intention of obtaining money, property, or other tangible benefit by convincing another that he or she received the award".This decoration is covered by the Stolen Valor act. Fraudulently claiming to have received a Navy Good Conduct Medal can result in punishment including a fine, imprisonment for not more than one year, or both