The Army Good Conduct Medal comes with a unique service ribbon, which is worn on the recipient's uniform in situations where the full medal is not worn. If you have earned this decoration, you can wear the service ribbon on your ribbon rack. 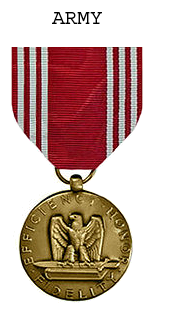 The Army medal is a circular gold piece with an eagle in the center, wings outstretched. It is clutching a sword, and a book in its talons while the words "Fidelity, Honor,Efficiency" line the edges.

What is the Army Good Conduct Medal Decoration?

In 1941, the United States Army introduced the Good Conduct medal through Executive Orders 8809, 9323, and 10444. It is a way of rewarding soldiers who have served honorably and faithfully for a set period of time. The inspiration behind this medal was to allow commanders the ability to reward influential leaders within their ranks with medals that did not reach the level of higher reward like the Bronze Star.

How Do You Earn the Army Good Conduct Medal?

To be awarded the medal, a military member must serve three years without any formal discipline such as a Letter of Reprimand, Article 15 or Court Martial. This medal is automatic if the time is appropriately served.

The Order of Precedence of the Army Good Conduct Medal is 59, and this precedence is used when placing the associated service ribbon on your uniform ribbon rack. You can see a full list of decorations in the order of precedence on the Decorations homepage.

The ribbon is worn between the Prisoner of War Medal, Combat Readiness Medal(Air Force) and the Reserve Good Conduct Medal.

The Stolen Valor Act of 2013 is a federal law that makes it illegal for any person to falsely claim to be the recipient of certain military awards, "with the intention of obtaining money, property, or other tangible benefit by convincing another that he or she received the award".This decoration is covered by the Stolen Valor act. Fraudulently claiming to have received a Army Good Conduct Medal can result in punishment including a fine, imprisonment for not more than one year, or both