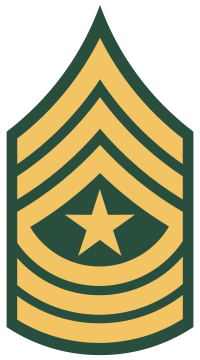 How much does an E-9 Sergeant Major in the Army get paid?

A Sergeant Major is a noncommissioned officer in the United States Army at DoD paygrade E-9. A Sergeant Major receives a monthly basic pay salary starting at $0 per month, with raises up to $8,498 per month once they have served for over 38 years.

In addition to basic pay, Sergeant Majors may receive additional pay allowances for housing and food, as well as special incentive pay for hostile fire and dangerous duties.

Including the most common pay allowances, the average total compensation for a Sergeant Major may range from $
Notice: Trying to access array offset on value of type null in /home/militaryranks/public_html/ranks_pay.php on line 172
21,249.24

Additional Pay & Allowances for an E-9

In addition to Basic Pay, a Sergeant Major may be eligible to receive several types of allowances and incentive pay.

A Sergeant Major may receive hazard pay of $240.00 / mo while serving in an active combat zone or subject to hostile fire or other hazards.