The Silver Star comes with a unique service ribbon, which is worn on the recipient's uniform in situations where the full medal is not worn. If you have earned this decoration, you can wear the service ribbon on your ribbon rack. 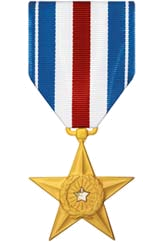 Design of the Silver Star

The Silver Star is a gold five-pointed star, 1 1/2 inches (38 mm) in circumscribing diameter with a laurel wreath encircling rays from the center and a 3/16 inch (4.8 mm) diameter silver star superimposed in the center. The pendant is suspended from a rectangular shaped metal loop with rounded corners. The reverse has the inscription FOR GALLANTRY IN ACTION.

What is the Silver Star Decoration?

The United States military sorts decorations into categories called Classes and Types. The Silver Star medal is classified as a Personal Decoration of the type Distinguished Service Medal.

How Do You Earn the Silver Star?

The Silver Star is awarded for gallantry that does not meet the requirements for higher valor awards: the Distinguished Service Cross, the Navy Cross, or the Air Force Cross. The action must have taken place while engaged in combat against an enemy of the United States in which the United States is not a belligerent party.

Pilots are often considered eligible to receive the Silver Star upon becoming an ace, having five or more confirmed aerial kills. To receive the award, the pilot and, in multi-seat fighters, the weapons system officer or radar intercept officer, intentionally and successfully risking his life multiple times under combat conditions and emerging victorious. During the Vietnam War, the last conflict to produce U.S. fighter aces: an Air Force pilot and two navigators/weapon systems officers (who were later retrained as Air Force pilots), a naval aviator and a naval flight officer/radar intercept officer who had achieved this distinction, were eventually awarded the Air Force Cross and Navy Cross, respectively, in addition to Silver Stars previously awarded for earlier aerial kills.

The Order of Precedence of the Silver Star is 12, and this precedence is used when placing the associated service ribbon on your uniform ribbon rack. You can see a full list of decorations in the order of precedence on the Decorations homepage.

The Silver Star is the successor award to the "Citation Star. The Citation Star was established by an Act of Congress on July 9, 1918 during World War I. However, on July 19, 1932, the Secretary of War approved the conversion of the Citation Star to the Silver Star Medal while the original star was incorporated into the center of the medal.