The Order of Merit (Germany) comes with a unique service ribbon, which is worn on the recipient's uniform in situations where the full medal is not worn. If you have earned this decoration, you can wear the service ribbon on your ribbon rack. 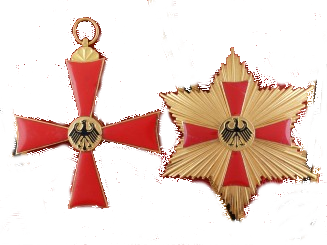 Design of the Order of Merit (Germany)

What is the Order of Merit (Germany) Decoration?

The Order of Merit of the Federal Republic of Germany was instituted in 1951 by German President Theodor Heuss. It is the only Order that may be awarded in all fields of achievements. The Order is considered the highest tribute the Federal Republic of Germany can award to individuals who has dedicated their time and effort towards services to the nation. The Federal President draws public attention to achievements that the President believes are of particular value to society when awarding the Order of Merit. Germany?s Order of Merit is comprised into four groups with seven regular and two special classes. Medal of Merit Group (Class: Medal), Order of Merit Group (Class: Cross, Officer's Cross), Great Cross of Merit Group (Commander's Cross, Knight Commander's Cross, Grand Cross), and Grand Cross (Class: Special Class, Special Issue, 1st Class). The President of the Federal Republic holds the Grand-Cross Special Class ex officio. The Grand-Cross Special Class ex officio is awarded to him in a ceremony by the President of the Bundestag, attended by the Chancellor of Germany, the President of the Bundesrat, and the Supreme Court President. There is also the provision of awarding the Grand-Cross with a laurel wreath design; black eagle in the center of the medallion surrounded by a laurel wreath in relief. This Grand-Cross Special Issue has been awarded only twice, to former German chancellors Konrad Adenauer and Helmut Kohl.

The United States military sorts decorations into categories called Classes and Types. The Order of Merit (Germany) medal is classified as a International Award of the type International Senior Military Award.

How Do You Earn the Order of Merit (Germany)?

The Order of Merit is awarded to Germans and foreigners for achievements of all kinds of services to the nation. Other than the German president, only foreign head of states and their spouse can be awarded with the highest class of the Order.

Order of Merit (Germany) and the Stolen Valor Act

The Stolen Valor Act of 2013 is a federal law that makes it illegal for any person to falsely claim to be the recipient of certain military awards, "with the intention of obtaining money, property, or other tangible benefit by convincing another that he or she received the award".This decoration is covered by the Stolen Valor act. Fraudulently claiming to have received a Order of Merit (Germany) can result in punishment including a fine, imprisonment for not more than one year, or both