The NATO Medal (Yugoslavia) comes with a unique service ribbon, which is worn on the recipient's uniform in situations where the full medal is not worn. If you have earned this decoration, you can wear the service ribbon on your ribbon rack. 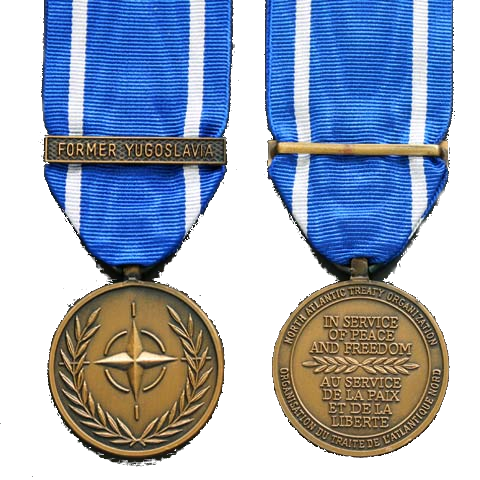 Design of the NATO Medal (Yugoslavia)

What is the NATO Medal (Yugoslavia) Decoration?

The NATO Medal for Former Yugoslavia is awarded to individuals were deployed to Bosnia in December 1995 in support of Operation Joint Endeavor; the largest military operation ever undertaken by the Alliance. Task Force Eagle, which is comprised of 20,000 American soldiers, was the US component of NATO's Implementation Force (IFOR) and was tasked with implementing the military elements of the Dayton Peace Accords in support of Operation Joint Endeavor. Based on UN Security Council Resolution 1031, NATO was given the mandate to implement the military aspects of the Peace Agreement. A NATO-led multinational force, called the Implementation Force (IFOR), started its mission on 20 December 1995. After the peaceful conduct of the September 1996 elections, IFOR successfully completed its mission of implementing the military annexes of the General Framework Agreement for Peace. However, it was clear that much remained to be accomplished and that the political environment would continue to be potentially unstable.

How Do You Earn the NATO Medal (Yugoslavia)?

The Order of Precedence of the NATO Medal (Yugoslavia) is 151, and this precedence is used when placing the associated service ribbon on your uniform ribbon rack. You can see a full list of decorations in the order of precedence on the Decorations homepage.

All medals except the Macedonian NATO Medal have corresponding campaign clasps. However, some military organizations (such as the United States) prohibit wearing the medal with a clasp. Instead, the medal uses authorize service stars. Its pinned on the left breast, suspended from the ribbon. The specific order after the UN HQ medal and before the NATO-Kosovo medal.

The Stolen Valor Act of 2013 is a federal law that makes it illegal for any person to falsely claim to be the recipient of certain military awards, "with the intention of obtaining money, property, or other tangible benefit by convincing another that he or she received the award".This decoration is covered by the Stolen Valor act. Fraudulently claiming to have received a NATO Medal (Yugoslavia) can result in punishment including a fine, imprisonment for not more than one year, or both