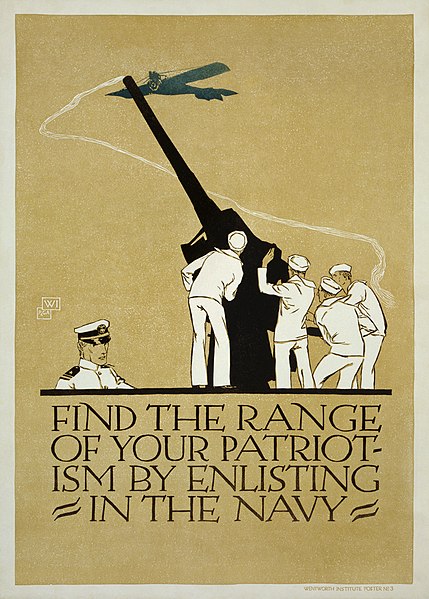 In 1914, when The United States discovered that Germany was illegally bringing weapons to Mexico, they ordered the Navy to stop the next shipment from docking. Stopping the ship is now known as the Ypiranga Incident. On April 21, a brigade of seamen and marines occupied Veracruz, and 55 Medals of Honor were awarded to men involved in the event, the most for a single event to date.

In 1915, regardless of the fact that the United States remained neutral at this point, two ships, Gulflight and Lusitania, were sunk by German submarines. For six months, the Naval Act of 1916 was under debate, but was finally approved. This act called for $500 million dollars to be spent on the building of 10 battleships, 6 battle cruisers, 10 scout cruisers, 50 destroyers and 67 submarines over the next three years. Quite a lot of the ships were not finished until after World War One, but most of the ships built served in World War Two. When the US really joined the war in 1917, the Navy was restricted to convoy escort, troop transport, and laying a minefield in the North Sea. Then, when the Navy was sent out to help in the fighting, they mostly fought along with other nations during the war. They were also the first branch of the United States Armed Forces to allow women to enlist into non-nursing positions, which happened during this war.

At the end of World War One, the United States had the largest Navy of the world, in terms of personnel. There was a brief period of demobilization that was quickly followed by a swift rebuilding of all armed forces in preparation for the next war. In response to the thought of further carnage similar to the first war, there was the Washington Naval Conference of 1921 that led to the Nine-Power Treaty, the Treaty for the Limitation of Naval Armament, and restrictions on the usage of submarines and poison gas. The five countries that participated in the Treaty for the Limitation of Naval Armament were United States, United Kingdom, Japan, Italy and France; a few of which had to scrap many ships to meet the requirements of the treaty.