Marines in the Twenty-First Century 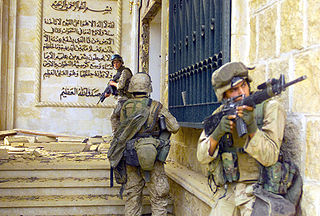 Marines in the Twenty-First Century

Following the terrorist attacks of Sepember 11th, 2001, Marine forces served alongside Army troops in both Iraq and Afghanistan. After nearly ten years, the Marine Corps officially withdrew from Iraq on January 23rd, 2010, with Marine operations continuing in Afghanistan. Nearly 1,000 Marines died in both operations.

Today, the United States Marine Corps serves an increasingly important role in shaping and enforcing America's foreign policy as well as aiding in humanitarian efforts and disaster relief around the world. From a humble beginning of several hundred ship-bound Colonial volunteers, the Marine Corps has evolved into an elite force prepared for an ever expanding range of challenges in the twenty-first century.