When World War Two started up, the army decided on the title, Army of the United States, instead of the National Army. The Army of the United States was all of the things the National Army had and more. They included the regular army, National Guard, the conscript forces, and even included reserve forces. Another development during this war is that the Army developed a more flexible organization of divisions that allowed for smoother operations. 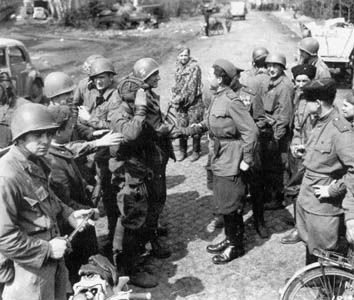 The United States attempted to stay out of the war, but was pushed into joining the war after the unprovoked Japanese attack on Pearl Harbor. United States troops made up a large number of the armies fighting on the European front; this was especially noted when both North Africa and Sicily were captured. American troops also played a large part in D-Day, as well as the liberation of Nazi Germany that followed. Millions of American troops were involved in the war by the time it ended. In the Pacific, the Army worked alongside of the Marines and the Navy in the Island Hoping Campaign that took the islands of the Pacific out of Japanese control. When the Axis powers put up their white flags and surrendered in May, many soldiers of the Army were deployed to occupy both Germany and Japan, but they otherwise returned home to the states.