America relied heavily on the Air Force during the Vietnam War. The Air Force aided in many battles and conflicts. In 1964, after the Gulf of Tonkin incident, the Air Force began strategically bombing North Vietnam. A sustained bombing mission began in 1965, referred to as Operation Rolling Thunder. This operation was started with the intentions of destroying North Vietnam's fighting spirit, industrial bases, air defenses, and to stop them from continuing down the Ho Chi Minh Trail. They dropped more bombs onto North Vietnam during those three years (1965-68) than they did throughout the entirety of WWII. Although the campaign expired multitudes of resources, it failed to reach the full magnitude of its goals. While it failed in many aspects, the strategy did successfully hurt Northern Vietnam's economy and infrastructure. 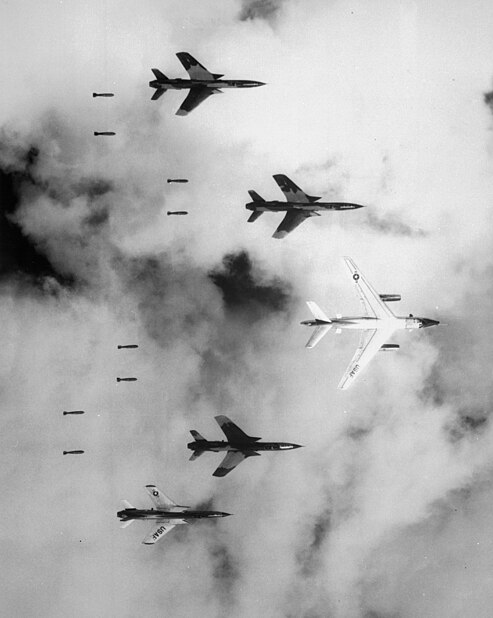 In 1972, the Air Force also played a major part in defending against the East Offensive. The USAF's rapid redeployment of fighters, bombers, and other attack aircraft helped Southern Vietnam successfully turn back the assault. In Operation Linebacker, also in 1972, the United States demonstrated that the Air Force could be successful even without the aid of significant ground forces. This continued with Operation Linebacker II, otherwise known as the Christmas bombings, which then led to successful peace talks that finalized the Paris Peace Negotiations.