The NATO Medal (Macedonia) comes with a unique service ribbon, which is worn on the recipient's uniform in situations where the full medal is not worn. If you have earned this decoration, you can wear the service ribbon on your ribbon rack. 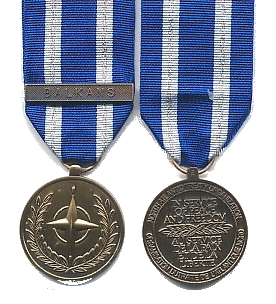 Design of the NATO Medal (Macedonia)

The NATO Medal for Macedonia has a blue and white ribbon with four white stripes. The Medal is circular in form and made of bronze. On the obverse, it bears the NATO star set in a wreath of olive leaves. On the reverse, the title "North Atlantic Treaty Organization" and the words "In the service of peace and freedom" are inscribed in English and French. It has a 12mm bronze ring, which holds the ribbon, passes through a small hollow ball at the top of a claw joined to the top of the medal. The tour numerals are Arabic script and made of bronze.

What is the NATO Medal (Macedonia) Decoration?

The NATO Medal is an international military decoration, awarded to various military personnel of the world under the authority of the North Atlantic Treaty Organization (NATO). It is manufactured by Eekelers-Centini International, of Hemiksem, Belgium. The Macedonia NATO Medal is awarded to those that served for 25 days (continuous or accumulated) service on the land, or air space of former Yugoslavia Republic of Macedonia. On January 1st 2003, this medal was replaced by the Non-Article 5 NATO Medal for Operations in the Balkans. On April 25th 2002, The Secretary General of NATO, Lord Robertson of Port Ellen awarded NATO medals to 16 NATO personnel who took part in operations in the former Yugoslav Republic of Macedonia.

How Do You Earn the NATO Medal (Macedonia)?

The NATO medal of Macedonia is awarded for 25 days (continuous or accumulated) service on the land or air space of former Yugoslav Republic of Macedonia. The dates includes between June 1st, 2001 and August 27th, 2001 during the period prior to Operation Essential Harvest and/or dates between August 27th, 2001 and September 27th, 2001 during the period of Operation Essential Harvest.

The Order of Precedence of the NATO Medal (Macedonia) is 153, and this precedence is used when placing the associated service ribbon on your uniform ribbon rack. You can see a full list of decorations in the order of precedence on the Decorations homepage.

All medals except the Macedonian NATO Medal have corresponding campaign clasps. However, some military organizations (such as the United States) prohibit wearing the medal with a clasp. Instead, the medal uses authorize service stars. Its pinned on the left breast, suspended from the ribbon. The specific order is after the NATO Kosovo medal and before the NATO Article-5 medal.

The Stolen Valor Act of 2013 is a federal law that makes it illegal for any person to falsely claim to be the recipient of certain military awards, "with the intention of obtaining money, property, or other tangible benefit by convincing another that he or she received the award".This decoration is covered by the Stolen Valor act. Fraudulently claiming to have received a NATO Medal (Macedonia) can result in punishment including a fine, imprisonment for not more than one year, or both